Streets deteriorate as they age, much like the roof and paint on your home. Golden Valley's Pavement Management Program (PMP) is a comprehensive, systematic way for the City to evaluate its street system and follow through with long-term, cost-effective maintenance and rehabilitation.

The City of Golden Valley owns and operates 128 miles of underground watermain. This distribution system delivers clean, potable water to the residents and businesses of the city. The system was predominantly installed in the 1950’s and 1960’s as the City developed. Over time, the piping materials degrade, break down, and fail. This process is often accelerated when the piping is located in wet, clay soils that are corrosive.

In 1962, a cast iron watermain was installed along Glenwood Ave from Jersey Ave S to

Xenia Ave S. After 60 years of service, this section of watermain has been rapidly deteriorating, resulting in several watermain breaks per year. 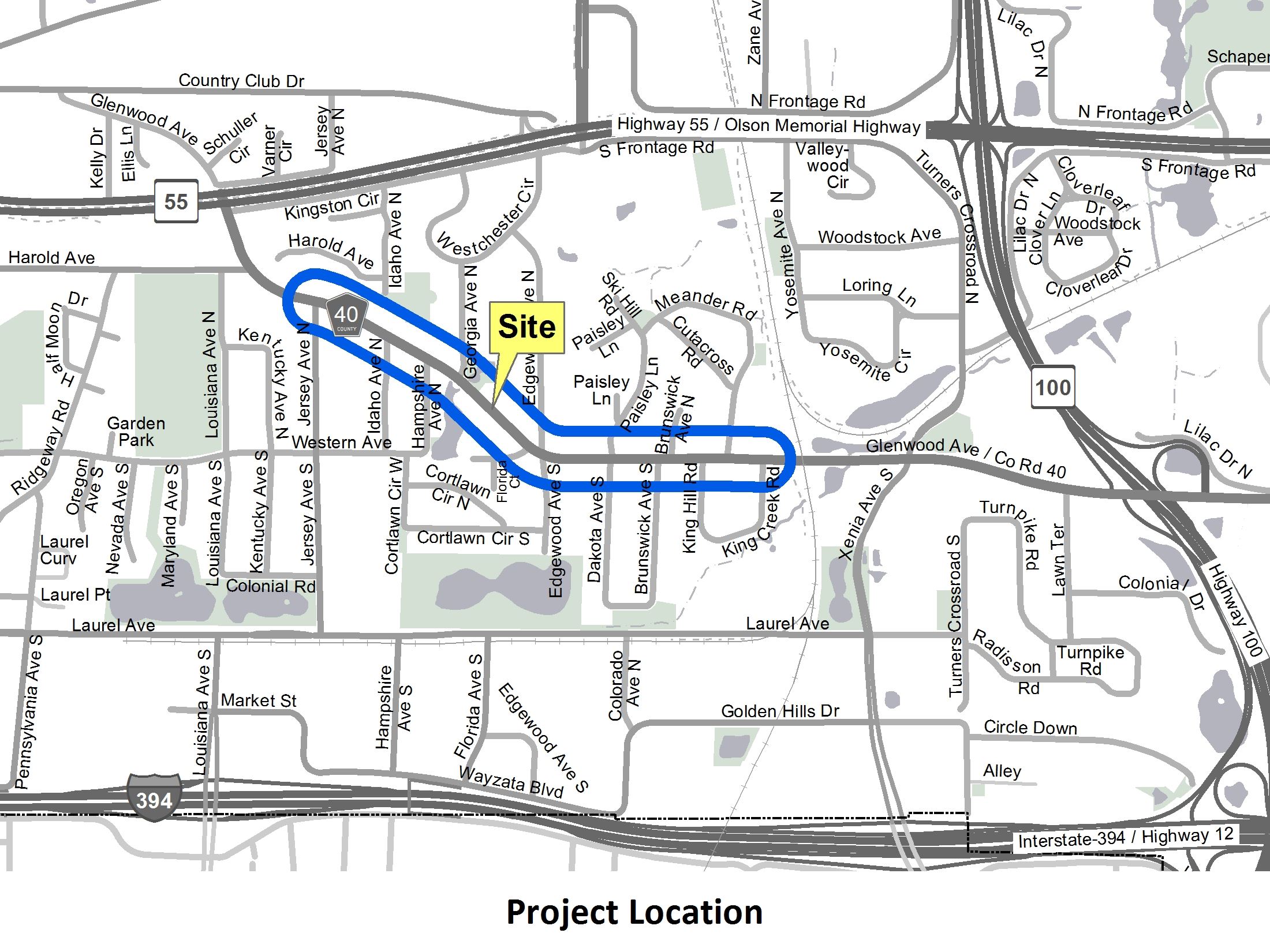 Each watermain break, typically occurring in the winter, costs thousands of dollars to fix and puts residents out of water for the duration of the repair. Over the last 3 years, the city has repaired 10 watermain breaks between along this section of watermain totaling more than $125,000 in repairs. Notably, each repair is an ‘isolated fix’ and does nothing to improve the longevity of the system as whole. 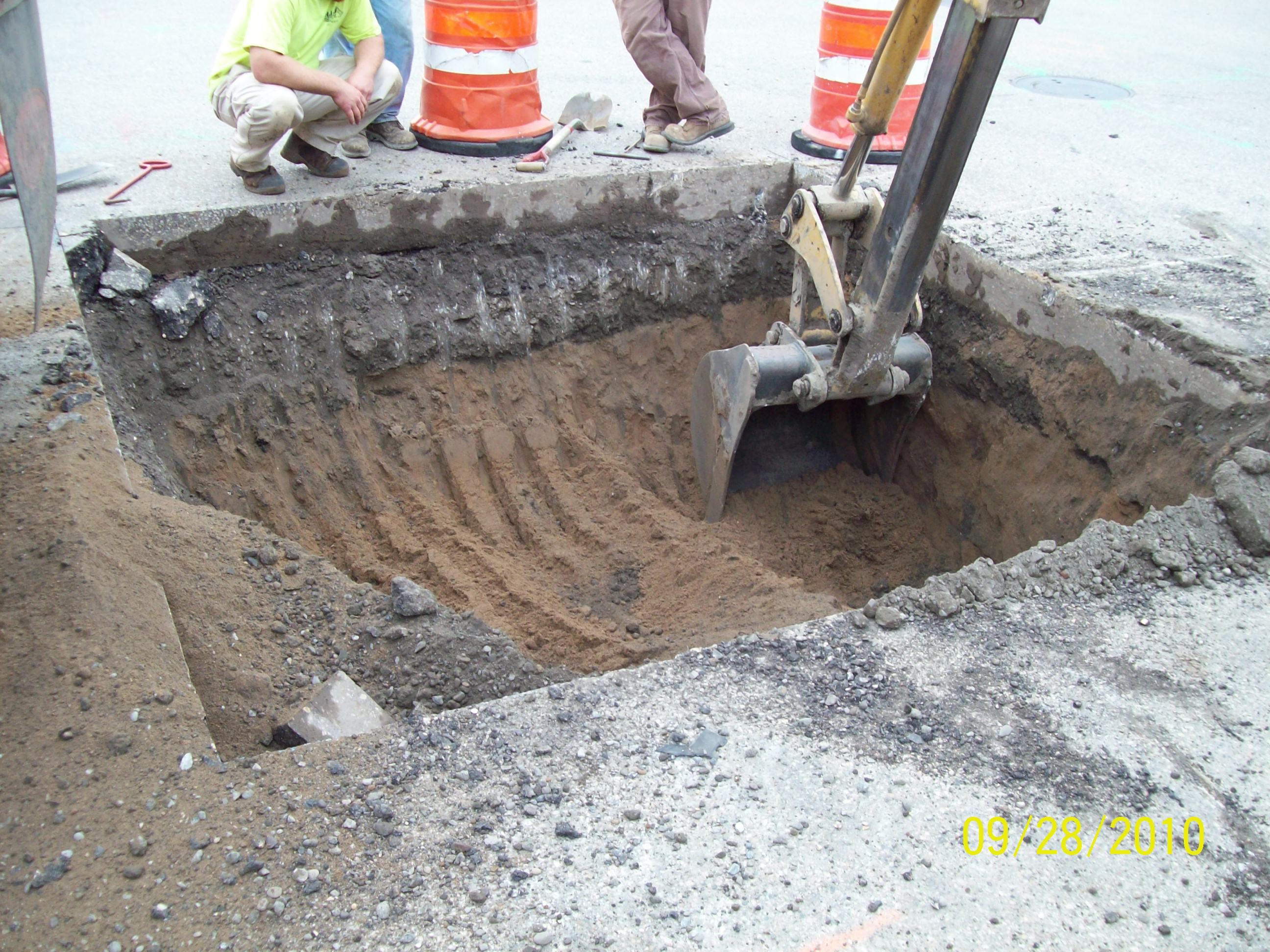 Glenwood Ave is a Hennepin County roadway that is used by several thousand cars per day. Each break requires coordination with Hennepin County and often results in negative impacts to motorists.

For the last several years, City staff has been planning for and scoping possible improvements to the watermain along Glenwood Ave. Because the watermain is under the roadway, traditional open-trench replacement of the system would be very intrusive and expensive. As such, various trenchless methodologies were explored in a Feasibility Report to determine the appropriate replacement method. Through this process, Pressure Rated Cured-In-Place-Pipe (CIPP) lining was selected as the preferred rehabilitation method. This method is cost-effective, minimally intrusive, and will extend the life of the watermain another 50-100 years. CIPP pipeline rehabilitation has been a widely used and accepted method for replacing public utilities for almost 50 years and has been successfully used in Golden Valley on other watermain rehabilitation projects, most notably along Boone Ave, Legend Drive, and Brunswick Ave. 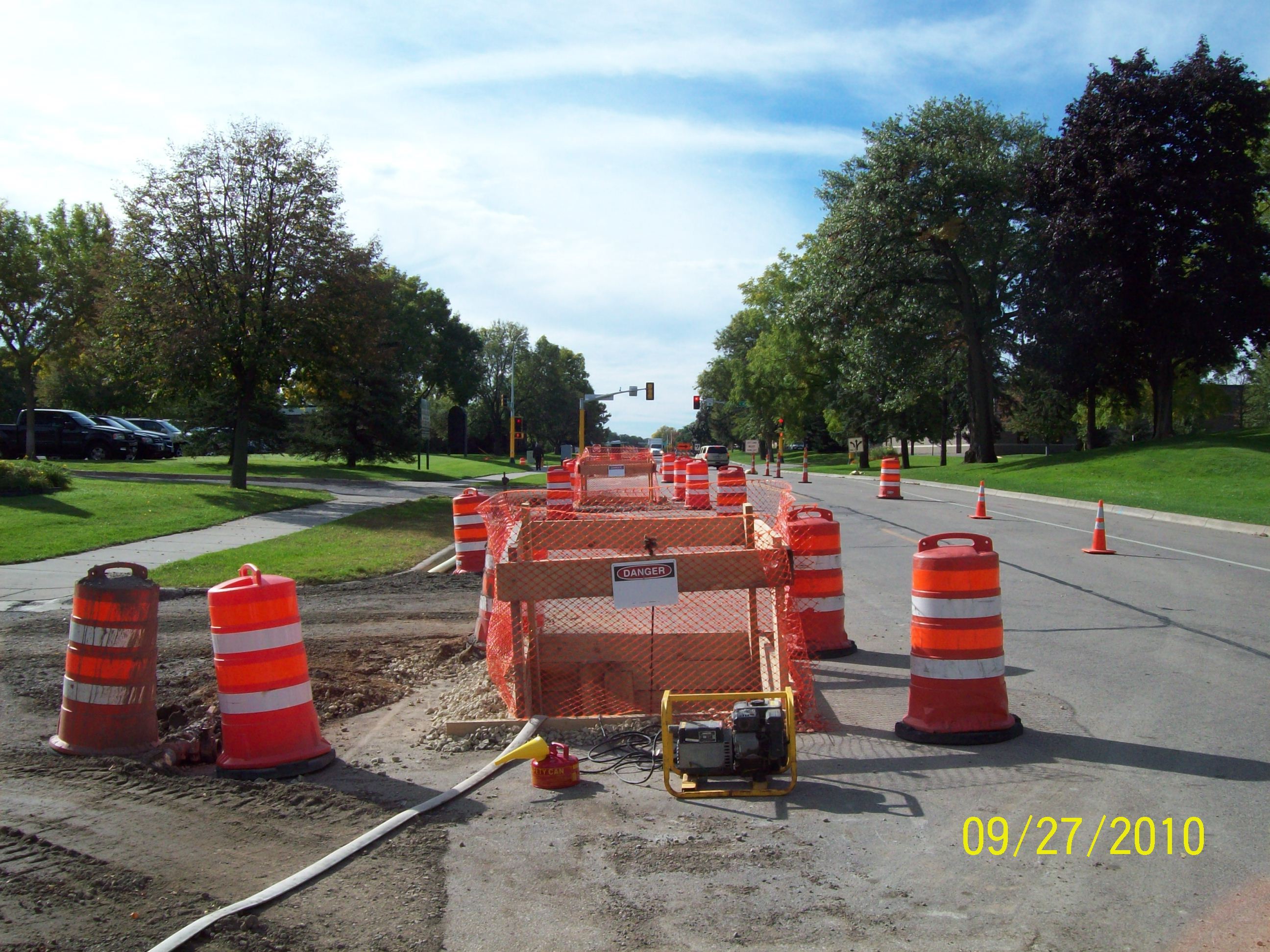 The CIPP watermain lining process is fairly involved but generally includes the installation of a flexible sock-like tube inside the existing watermain. This sock is then expanded until it is pressed firmly against the existing pipe wall. The sock is then cured with hot water, or other methods, until has completely hardened, creating a new pipe inside of the existing pipe. Small service connections that feed homes are then robotically cut out from inside the pipe. Larger connections for hydrants and valves are typically excavated and replaced.

Process At A Glance

CIPP watermain lining meets all health and safety codes for potable water and will be reviewed and permitted through the Minnesota Department of Health.

This project will be under construction from July through October and will have significant impacts to traffic on Glenwood Ave. Notably, the eastbound lane will be closed from Jersey Ave S to Xenia Ave S and traffic will be detoured along Hwy 55 and Hwy 100. 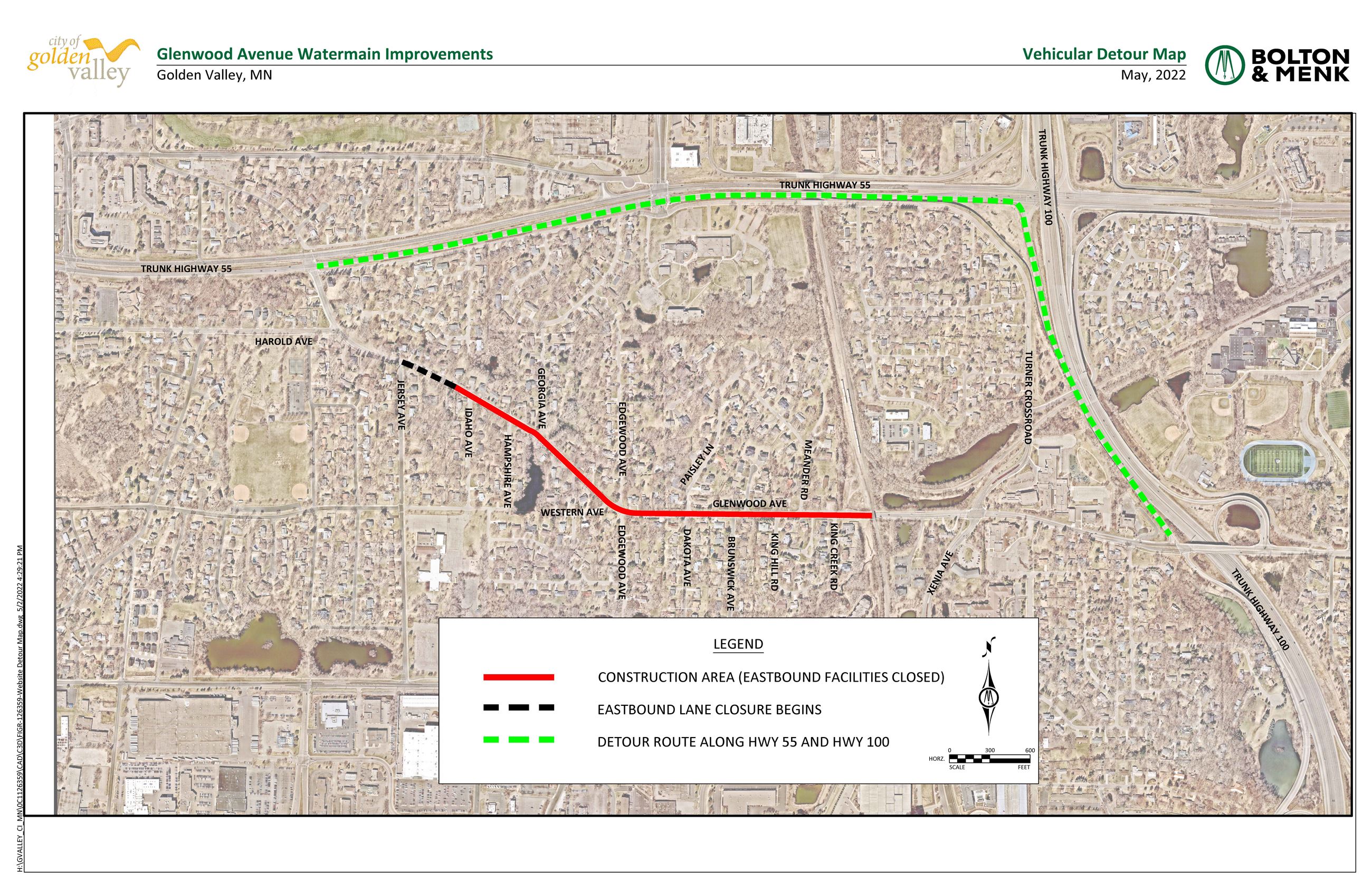 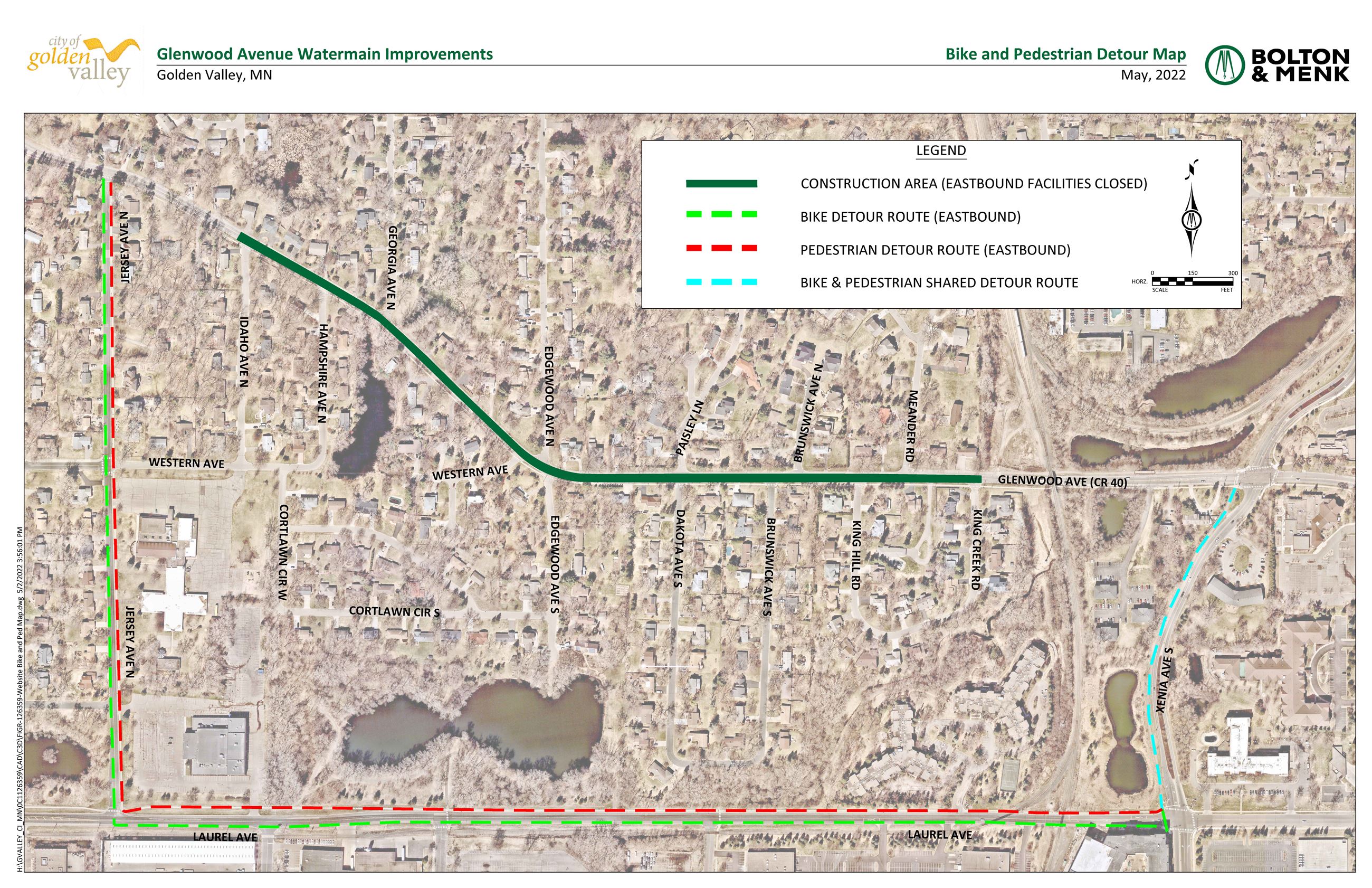 At an estimated total project cost of $1.5M, this project is a long-term investment in the City’s watermain distribution system. The project is being funded by the City’s Water & Sewer Utility Fund.

Questions regarding the overall project or to discuss specific impacts to your property should be directed to:

The Union Pacific Railroad will replace crossings at 10th Avenue N and Mendelssohn Avenue N near the intersection of the two streets. Construction is expected to take place summer 2022. When the project begins each street will be closed for approximately one week. Detours will be posted ahead of time, and information regarding the closures will be published on the City website.

For information about construction on county roads in Golden Valley, use Hennepin County's Road Construction Locator.

For construction information on highways and interstates, such as Highways 55, 100, and 169, and Interstate 394, search the MnDOT website.